The Moon is very beautiful with his round, bright face which shines with soft and gentle light on all the world of man. But once there was a time when he was not so beautiful as he is now.

Six thousand years ago the face of the Moon became changed in a single night. Before that time his face had been so dark and gloomy that no one liked to look at him, and for this reason he was always very sad.

One day he complained to the flowers and to the stars—for they were the only things that would ever look in his face. He said, «I do not like to be the Moon. I wish I were a star or a flower. If I were a star, even the smallest one, some great general would care for me; but alas! I am only the Moon and no one likes me.

If I could only be a flower and grow in a garden where the beautiful earth women come, they would place me in their hair and praise my fragrance and beauty. Or, if I could even grow in the wilderness where no one could see, the birds would surely come and sing sweet songs for me. But I am only the Moon and no one honors me.»

The stars answered and said, «We can not help you. We were born here and we can not leave our places and We never had any one to help us. We do our duty, we work all the day and twinkle in the dark night to make the skies more beautiful.—But that is all we can do,» they added, as they smiled coldly at the sorrowful Moon.

Then the flowers smiled sweetly and said, «We do not know how we can help you. We live always in one place—in a garden near the most beautiful maiden in all the world. As she is kind to every one in trouble we will tell her about you.

We love her very much and she loves us. Her name is Tseh-N’io.» Still the Moon was sad. So one evening he went to see the beautiful maiden Tseh-N’io. And when he saw her he loved her at once. He said, «Your face is very beautiful. I wish that you would come to me. that my face would be as your face. Your motions are gentle and full of grace. Come with me and we will be as one—and perfect. I know that even the worst people in all the world would have only to look at you. They would love you. Tell me, how did you come to be so beautiful?»

«I have always lived with those who were gentle and happy, and I believe that is the cause of beauty and goodness,» answered Tseh-N’io.

And so the Moon went every night to see the maiden. He knocked on her window, and she came. And when he saw how gentle and beautiful she was, his love grew stronger, and he wished more and more to be with her always.

One day Tseh-N’io said to her mother, «I should like to go to the Moon. Live always with him. Will you allow me to go?»

Her mother thought so little of the question that she made no reply, and Tseh-N’io told her friends that she was going to be the Moon’s bride.

In a few days she was gone. Her mother searched everywhere but could not find her. And one of Tseh-N’io’s friends said,—»She has gone with the Moon. For he asked her many times.»

A year and a year passed by and Tseh-N’io, the gentle and beautiful earth maiden, did not return. Then the people said, «She has gone forever. She is with the Moon.»

The face of the Moon is very beautiful now. It is happy and bright and gives a soft, gentle light to all the world. And there are those who say that the Moon is now like Tseh-N’io, who was once the most beautiful of all earth maidens.

Next Story: The Three Little Pigs 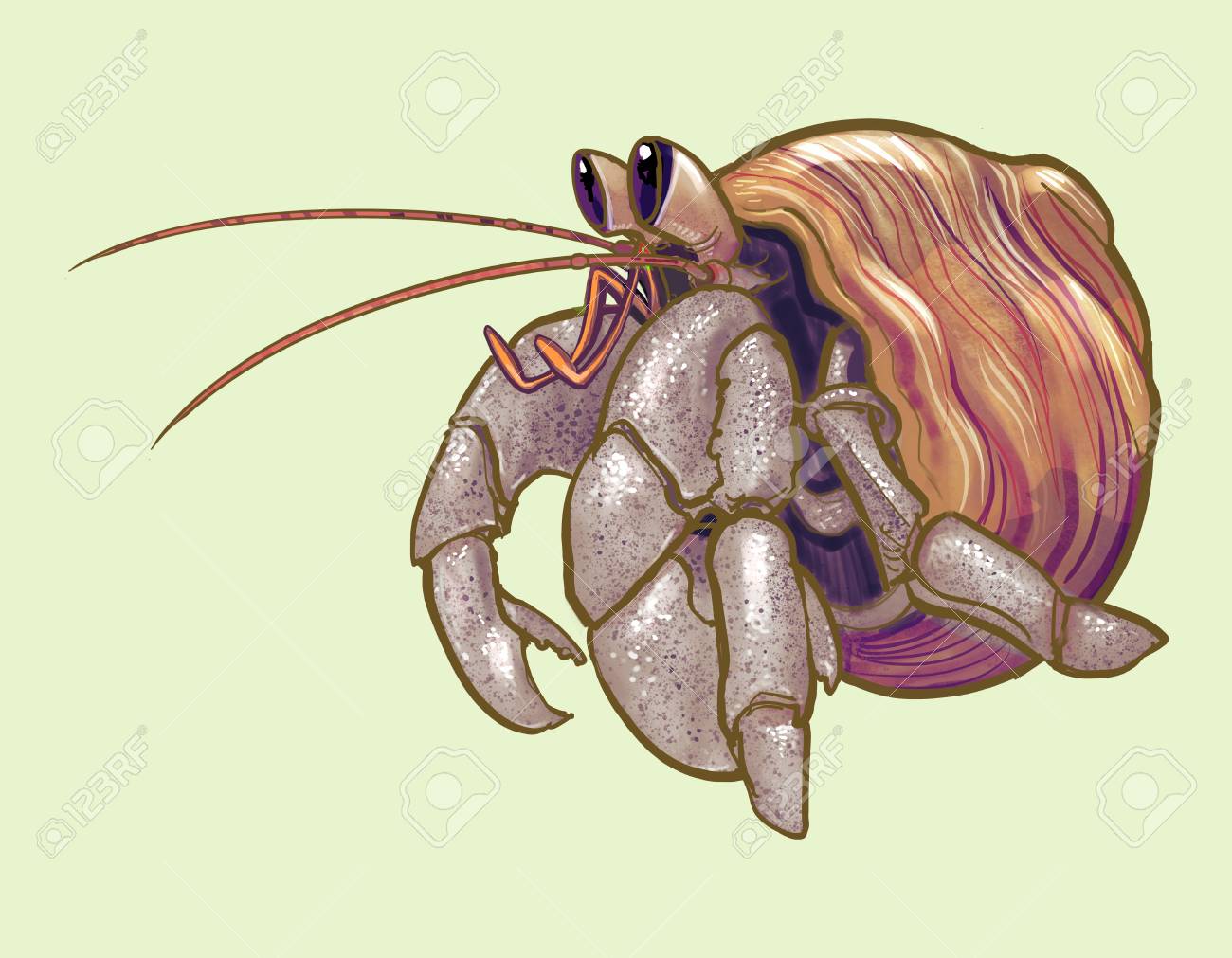 Long time ago, in the jungle of Malkand, there lived a hermit named Shalakya. Everyday at dawn he would take a dip in the holy Ganges. Chant mantras, and worship God.

One evening when he was sitting near the banks of Ganges, he saw a small mouse hiding from the piercing eyes of a hawk. “Oh poor mouse! If I don’t take it along with me, the hawk would carry it off.” So, Shalakya took the mouse to his hermitage.

“I will change this mouse to a girl,” he thought. “Then she would stay with me as my daughter, and look after me.” He transformed the mouse to a girl. He named her Apsara. With the passing years, she became a beautiful damsel. She took care of the hermit, brought flowers from the forest, and arranged for the puja. Shalakya decided to look for a groom for Apsara.

Seeing the radiant beauty of Apsara, the hermit thought the Sun God would be the perfect match for her. He invited the Sun God with his spiritual powers. The Sun God was spellbound by her beauty. “Ah! Beautiful maiden, would you like to marry me?” he proposed.

“I cannot marry you,” said. Apsara. “Your heat would be unbearable for me. ” The hermit then asked the Sun God, “Is there anybody more powerful than you; who would be worthy of my daughter?”

“The Cloud would make a better pair with Apsara,” he replied. “He can overcast me with his power.”Then the hermit invoked the Cloud. “The Cloud is like a vagabond!” said Apsara. “So I am not willing to marry him also.”

The cloud advised, “Mountain is more powerful than me. It can block my way.” Now Shalakya invoked the mountain. Apsara expressed her unwillingness. “The mountain is too heavy! I will be crushed under his weight!”The mountain said, “The mouse would be the ideal match for you. He can dig up holes through me.”

Then sillakya called a mouse. Apsara was delighted to see the mouse. Thought it to be the perfect match for her. Seeing the glow on Apsara’s face the hermit transformed Apsara to a mouse.

The hermit blessed the Mouse couple and realized that.

THE FOX AND THE STORK 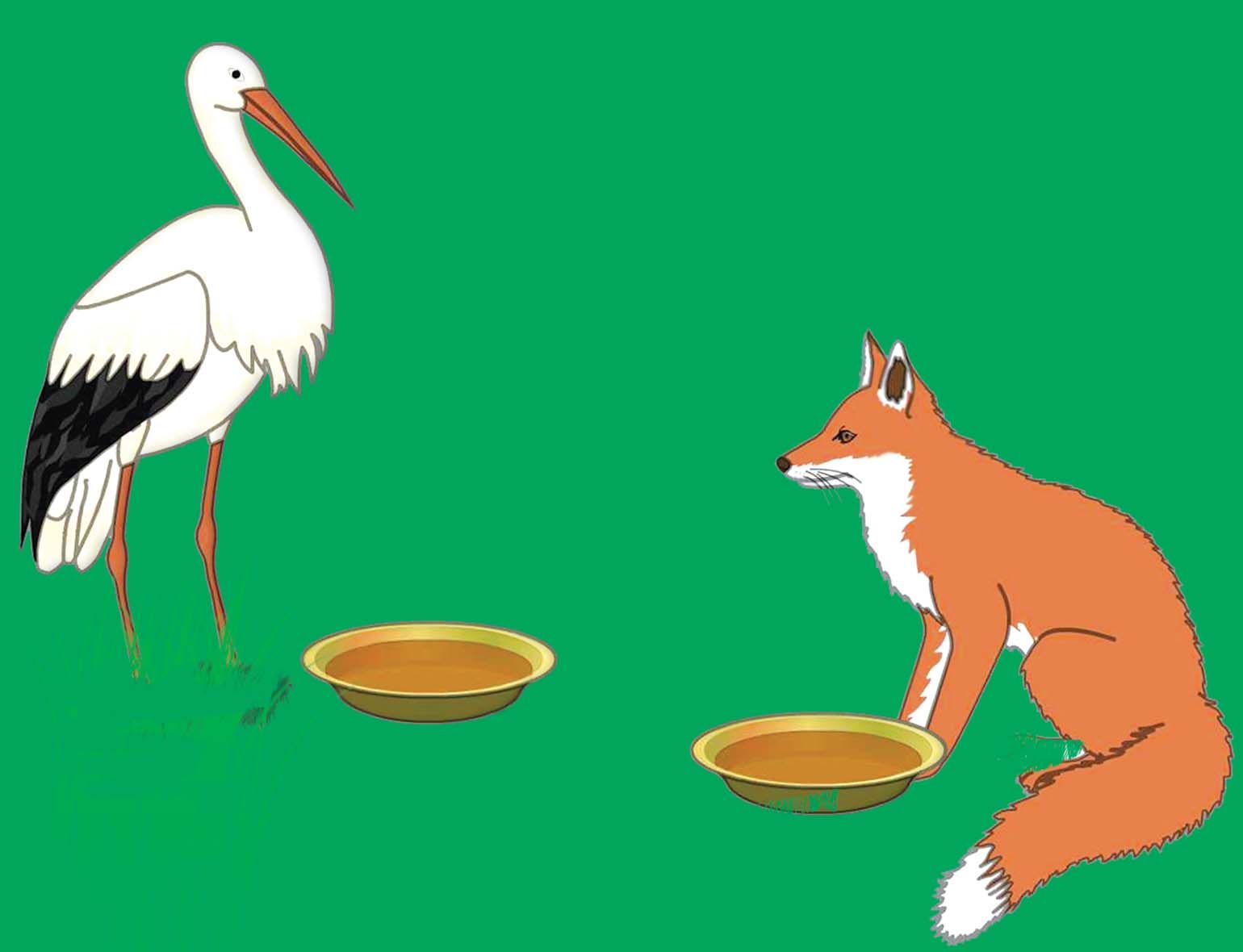 A selfish fox once invited a stork to dinner at his home in a hollow tree. That evening, the stork flew to the fox’s home and knocked on the door with her long beak. The fox opened the door and said, “Please come in and share my food.”

The stork was invited to sit down at the table. She was very hungry and the food smelled delicious! The fox served soup in shallow bowls and he licked up all his soup very quickly. However, the stork could not have any of it as the bowl was too shallow for her long beak. The poor stork just smiled politely and stayed hungry.

The selfish fox asked, “Stork, why haven’t you taken your soup? Don’t you like it?” The stork replied, “It was very kind of you to invite me for dinner. Tomorrow evening, please join me for dinner at my home.” The next day, when the fox arrived at the stork’s home, he saw that they were also having soup for dinner. This time the soup was served in tall jugs. The stork drank the soup easily but the fox could not reach inside the tall jug. This time it was his turn to go hungry.

A selfish act can backfire on you.

THE WOLF AND THE LAMB 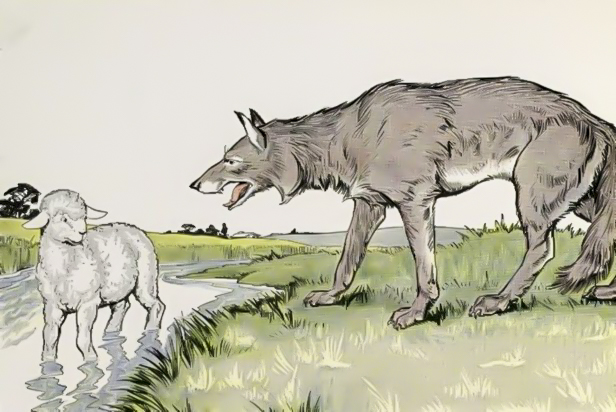 How the Moon Became Beautifu l— A lamb was grazing with a flock of sheep one day. She soon found  some sweet grass at the edge of the field. Farther and farther she went, away from the others. She was enjoying herself so much that she did not notice a wolf  coming nearer to her. However, when it pounced on her, she was quick to start pleading, “Please, please don’t eat me yet. My stomach is full of grass. If you wait a while, I will taste much better.”

The wolf thought that was a good idea, so he sat down and waited. After a while, the lamb said, “If you allow me to dance, the grass in my stomach will be digested faster.” Again the wolf agreed. While the lamb was dancing, she had a new idea. She said,  “Please take the bell from around my neck. If you ring it as hard as you can. I will be able to dance even faster.”

The wolf took the bell and rang it as hard as he could. The shepherd heard the bell ringing and quickly sent his dogs to find the missing lamb. Barking dogs frightened the wolf away and saved the lamb’s life.

The gentle and weak can sometimes be cleverer than fierce and strong. 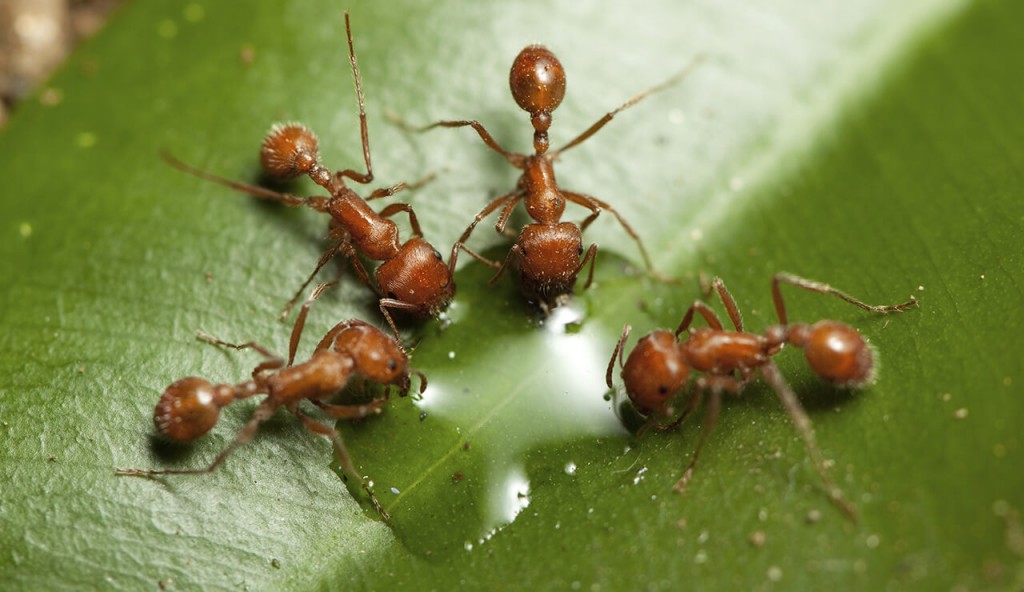 Ho Kwan of Kuang Nan was a kindhearted man and never killed any living thing. He had a jar containing one thousand pieces of silver which he kept in a casket. The white ants, of which there were so many in his district. Invaded the casket and ate part of the silver.

When his family found what had happened. They traced the ants to a hollow cave where millions of them were living. They thought if they put all of these ants in a crucible, perhaps they could recover a part of the lost silver. But Ho objected to the scheme, saying: «I cannot bear to see all these many creatures killed on account of a small sum of silver.»

So they let the matter drop. That night he dreamed that scores of soldiers in white armor came to him. Asking him to enter a carriage which they had with them and to come to the palace of their king. Ho Kwan proceeded with the soldiers to a town where the people looked prosperous. The buildings were all magnificent. Numerous officers came to meet him and took him to a splendid palace.

The king, clad in royal fashion, descended from the throne. Cordially saluting Ho Kwan, said: «By your benevolent acts we have been saved from our enemy. While not forgetting your kindness. The lack of strict discipline among my people caused you some trouble recently, but by your mercy they have again been saved from calamity.

How could I let your kindness go unrequited this time? There is a certain tree near your residence readily identified. Under which in olden times a certain person buried a jar full of silver. Just dig that out and keep it for yourself. You are the unicorn of mankind (the emblem of perfect goodness). That will never hurt any living soul. It is a pity that you are now too old to enjoy the fruits of your kindness yourself. But your descendents will reap what you have sown.»

After this Ho Kwan was escorted back to his own house as before. By armed soldiers. When he awoke he meditated on the dream and found it to be the work of the ants. So he dug up the place as told by their king and recovered a jar buried therein these many years. His son became an eminent scholar.