My uncle and aunt

Hello, I am Alessa. I am from Italy. I tell you about my uncle and my aunt. My aunt is a journalist. She works in the newspaper and She speaks English very well. She likes her job.

My uncle is an architect. He doesn’t speak English, He speaks Russian. He designs the construction of buildings and He likes his job too.

The Bear and the Crabs 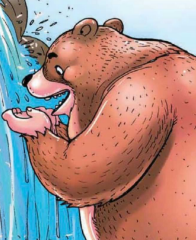 Once upon a time, a Bear lived in the forest. He was huge and would eat a lot of food. However, he was very lazy. So, he enjoyed eating the remains of the prey left by the bigger animals.

One day, the lazy Bear felt very hungry. He could not find any food around his den. The poor Bear waited and waited. Then, he started walking in search of food.

He thought to himself, ‘Oh! How I would love to eat some bamboo or fruits! But I would be the happiest if I found a beehive with honey!’

Now, at the end of the forest, there was a rocky shore along the big blue sea. The Bear soon reached the rocky shore. There, he found a firm rock and held on to it. He lowered his furry legs into the cold water and waited. Some Crabs that lived in the sea caught the`

Bear’s fur, thinking it was their prey. The Bear, at once, pulled his legs up and shook off the Crabs on the rock. Then he enjoyed the food he had cleverly collected all over his legs.

Even the lazy think of good ideas, when they are hungry. 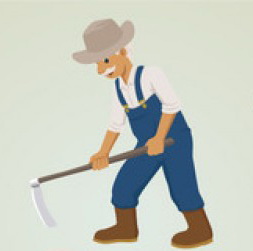 Once upon the time, there was an old farmer who had worked his crops for many years. One day his horse ran away. Upon hearing the news, his neighbors came to visit. “Such bad luck,” they said sympathetically.
“Maybe,” the farmer replied.
The next morning the horse returned, bringing with it three other wild horses. “How wonderful,” the neighbors exclaimed.
“Maybe,” replied the old man.
The following day, his son tried to ride one of the untamed horses, was thrown, and broke his leg. The neighbors again came to offer their sympathy on his misfortune.
“Maybe,” answered the farmer.
The day after, military officials came to the village to draft young men into the army. Seeing that the son’s leg was broken, they passed him by. The neighbors congratulated the farmer on how well things had turned out.
“Maybe,” said the farmer.