I’d like to be a queen in people’s hearts but I don’t see myself being queen of this country.

I live for my sons. I would be lost without them.

Life is just a journey.

I like to be a free spirit. Some don’t like that, but that’s the way I am.

I will fight for my children on any level so they can reach their potential as human beings and in their public duties.

I want my boys to have an understanding of people’s emotions, their insecurities, people’s distress, and their hopes and dreams.

Only do what your heart tells you.

I wear my heart on my sleeve.

“Family is the most important thing in the world.”

“I want to walk into a room, be it a hospice for the dying or a hospital for sick children, and feel that I am needed. I want to do, not just to be.”

When you are happy you can forgive a great deal.

Everyone of us needs to show how much we care for each other and, in the process, care for ourselves.

I went to the school and put it to William, particularly, that if you find someone you love in life, you must hang onto it, and look after it, and if you were lucky enough to find someone who loved you, then you must protect it.

Carry out a random act of kindness, with no expectation of reward, safe in the knowledge that one day someone might do the same for you.

The Monkey and the Crocodile 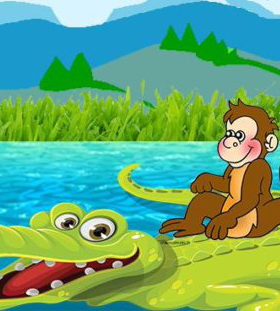 Once upon a time there was a clever monkey who lived by the river Ganga. A crocodile and his wife lived in the same river. One day, the crocodile’s wife fell very ill. She wanted to eat something special. She asked her husband to get her a monkey’s heart. The crocodile did not know what to do. Then he thought of his neighbour, the monkey.

He said, “Friend Monkey, why do you waste your time eating the fruits of this tree? There are juicy fruits on the other side of the river.”

When the monkey said that the river was too big for him to cross, the crocodile offered to take him on his back. After a while, the crocodile sank in the water along with the monkey. He told the monkey that his wife was sick and wanted his heart.

The monkey realised that he had been foolish to trust the crocodile. He quickly thought of a clever plan to escape. He said, “Alas friend! Our hearts are not inside us. We have to keep them hanging on trees. I wish you had told me earlier. Let’s go back and bring my heart.” The crocodile believed the monkey and brought him back to the tree.

The monkey at once climbed up the tree and escaped. He said to the crocodile, “You have a big body but no brains!” The crocodile had nothing to do but repent for his foolishness on being tricked by the monkey.