New Yorkers (for Elementary Levels A2)

Chapter one: The Christmas Presents

Chapter one: The Christmas Presents

One dollar and eighty-seven cents. That was all. Every day, when she went to the shops, she spent very little money. She bought the cheapest meat, the cheapest vegetables. And when she was tired, she still walked round and round the shops to find the cheapest food. She saved every cent possible.

Delia counted the money again. There was no mistake. One dollar and eighty-seven cents. That was all. And the next day was Christmas.

She couldn’t do anything about it. She could only sit down and cry. So she sat there, in the poor little room, and she cried.

Delia stopped crying and she washed her face. Shestood by the window,  and looked out at a grey cat on a grey wall in the grey road. Tomorrow was Christmas Day, and she had only one dollar and eighty-seven cents to buy Jim a Christmas present. Her Jim. She wanted very much to buy him something really fine, something to show how much she loved him.

Suddenly, Delia turned round and ran over to look in  the glass on the wall. Her eyes were bright.

Now, the James Dillingham Youngs had two very special things. One was Jim’s gold watch. It once belonged to his father, and, before that, to his grandfather. The other special thing was Delia’s hair.

Quickly, Delia let down her beautiful, long hair. It fell down her back, and it was almost like a coataround her. Then she put her hair up again, quickly. For a second or two she stood still, and cried a little.

Then she put on her old brown coat, and her old brown hat, turned, and  left the room. She went downstairs and out into the road, and her eyes were bright.

She walked along by the shops, and stopped when she came to a door with ‘Madame  Eloise — Hair’ on it. Inside there was a fat woman. She did not  look like an ‘Eloise’. 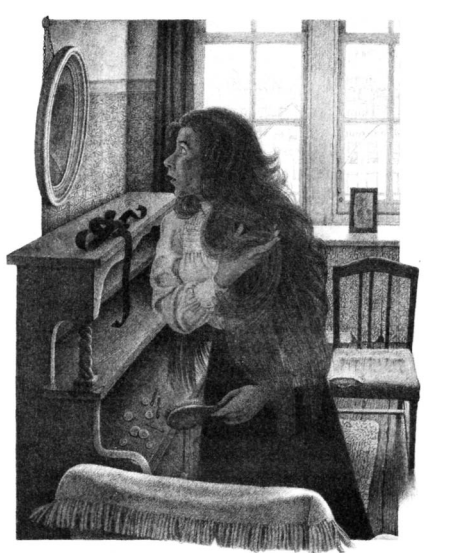 ‘Will you buy my hair?’ Delia asked.

‘I buy hair,’ Madame replied. ‘Take your hat off, then, and show me your hair.’

The beautiful brown hair fell down.

‘Twenty dollars,’ Madame said, and she touched the hair with her hand.

‘Quick! Cut it off! Give me the money!’ Delia said. The next two hours went quickly. Delia was happy because she was looking round the shops for Jim’s present.

At last she found it. It was a gold chain for The Watch. Jim loved his watch,  but it had no chain. When Delia saw this gold chain, she knew  immediately that it was right for Jim. She must have it.

The shop took twenty-one dollars from her for it, and she hurried home with the eighty-seven cents.

When she arrived there, she looked at her very short hair in the glass.  ‘What can I do with it?’ she thought. For the next half an hour she was very busy.

Then she looked again in the glass. Her hair was now in very small curls all over her head. ‘Oh, dear. I look like a schoolgirl!’ she said to herself. ‘What’s Jim going to say when he sees me?’

At seven o’clock the  dinner was nearly ready and Delia was waiting. ‘Oh, I  hope he thinks that I’m still beautiful!’ she thought.

The door opened and Jim came in and closed it. He looked very thin and he needed a new coat. His eyes were on Delia. She could not understand the look on his  face, and she was afraid. He was not angry or surprised. He just watched her, with that strange look on his face.

Delia ran to him.

‘Jim,’ she cried. ‘Don’t look at me like that. I sold my hair because I wanted to give you a present. It will soon be  long  again. I had to do it, Jim. Say  «Happy Christmas», please. I have a wonderful present for you!’

Jim looked round the room.

‘You say your hair has gone?’ he said, almost stupidly.

‘Yes. I told you. Because I love you! Shall I get the dinner now, Jim?’

Suddenly Jim put his arms round his Delia. Then he took something from his pocket and put it on the table.

‘I love you, Delia,’ he said. ‘It doesn’t matter if your hair is short or long.  But if you open that, you’ll see why I was unhappy at first.’

Excited, Delia pulled off the paper. Then she gave a little scream of happiness. But a second later there were cries of unhappiness.

Because there were The Combs — the combs for her beautiful hair. When she first saw these combs in the shop window, she wanted them. They were  beautiful combs, expensive combs, and now they were her combs. But she no longer had her hair!

Delia picked them up and held them. Her eyes were full  of  love.

‘But my hair will soon be long again, Jim.’

And then Delia remembered. She jumped up and cried, ‘Oh! Oh!’ She ran  to get  Jim’s beautiful present, and  she held it out to him.

But Jim did not do this. He sat down, put his hands behind his head, and he  smiled.

And this was the story of two young people who were very much in love.

Soapy sat on a seat in Madison Square, New  York, and  looked up at the sky. A dead leaf fell onto his arm. Winter was coming, and Soapy knew that he must make his plans. He moved unhappily on his seat.

He wanted three months in a nice, warm prison, with food and good friends. This was  how he usually spent his winters. And now it was time, because, at night on his seat in the square, three newspapers did not keep out  the cold.

So Soapy decided to go to prison, and at once began to try his first plan. It  was usually easy. He ate dinner in an expensive restaurant. Then he told them he had no money and they called a policeman. Nice and easy, with no trouble.

So Soapy left his  seat, and walked  slowly  along  the street. Soon he came to a bright  restaurant on Broadway. Ah!  This was all  right. He just  had to get to a table in the restaurant and sit down. That  was  all, because,  when he sat down, people could only see his coat and his shirt, which were not very old. Nobody could see his trousers. He thought about the meal-not too expensive, but good.

But  when Soapy went into the restaurant, the waiter saw Soapy’s dirty  old  trousers and terrible  shoes.

Strong hands turned him round and helped him out into the street again. So now he had to think of something  different. Soapy walked away from Broadway and soon he found  himself on Sixth Avenue. He stopped in front  of a shop window and looked  at it. It was  nice  and  bright, and  everybody  in the street could see him. Slowly and carefully he picked up a stone and  threw it at the window. The glass broke with a loud noise. People ran round  the  corner and  Soapy was happy, because  the man  in  front was  a

policeman.  Soapy did not move. He stood there with his hands in his  pockets, and he smiled. ‘I’ll soon be in prison now,’  he thought.

The policeman came up to Soapy. ‘Who did that?’  he asked.

‘Perhaps I did,’  Soapy replied.

But the policeman knew that people who break windows do not stop to talk to policemen. They run away. And just then the policeman saw another man, who was running to catch a bus. So  the  policeman ran after him. Soapy  watched for a minute. Then he walked  away. No luck again! He began to  feel  cross.

Strong hands turned Soapy round and helped him out into the street again.

But on the opposite side of the road he saw a little restaurant. ‘Ah, that’ll be all right,’ he thought, and he went  in. This time nobody looked at his trousers and his shoes.  He enjoyed his meal, and  then he looked up at the waiter, smiled and said, ‘I haven’t  got any money,  you know. Now, call  the  police. And do it quickly. I’m tired!’

Another waiter came, and together they threw Soapy out into the cold  street. Soapy lay there, very angry. With  difficulty, he stood up. His nice  warm prison was still far away, and Soapy was very unhappy. He felt worse  because a policeman,  who was standing  near, laughed  and  walked  away.

I found three thousand dollars in my pocket.

Sometimes  I  went  to  quiet,  expensive  restaurants with soft  music.  Sometimes  I went  on  the  river in  boats full  of noisy  young  men  and  their  girlfriends.  And  then there was Broadway,  with its theatres  and  bright lights.

The next few days in Manhattan were wonderfull.

One  afternoon,  in  one of my  favourite  restaurants  on Broadway,  I  was  going  to  my  table  when  somebody pulled  my  arm.

Her  wonderful  eyes  looked  carefully  at  my  face.

“You haven’t changed much in fifteen years, Elwyn,” she said.

The woman cried out, “Oh Elwyn! I’m your wife”

In the busy, noisy restaurant men’s eyes did not follow Tildy.

Mr. Seeders put his arm round Tildy, and kissed her loudly.

‘Really!’  Bogle answered.  This was good for business.

But she still had her friend, and Aileen put her arm round Tildy.

After  two  years  of this,  Miss  D’Armande  remembered, Miss  Ray  suddenly  left the  theatre  and  went  to  live  in the  country.

“Yes, Lynn, I left the theatre because I was tired of men.”

“Arthur was different from other men, I thought – a really good man.”

Short Stories in English — next — «The Lottery»