Mr. Harris and the Night Train (for Elementary Levels A2)

Mr. Harris and the Night Train

Mr. Harris liked trains. He was afraid of aeroplanes, and didn’t like buses. But trains —  they were big and noisy and exciting.  When he was a boy of ten, he liked trains.  Now he was a man of fifty, and he still liked trains.

So he was a happy man on the night of the 14th of September. He was on the night train from Helsinki to Oulu in Finland, and he had ten hours in front of him.

‘I’ve got a book and my newspaper,’ he thought.  ‘And there’s a good restaurant on the train.  And then I’ve got two weeks’ holiday with my Finnish friends in Oulu.’

After dinner in the restaurant Mr. Harris came back to his carriage, and sat in his seat next to the window.  For an hour or two he watched the trees and lakes of Finland out of the window.  Then it began to get dark, so he opened his book and began to read.

At midnight the train stopped at the small station of Otava. Mr. Harris looked out of the window, but he saw nobody.  The train moved away from the station, into the black night again.  Then the door of Mr.  Harris’s carriage opened, and two people came in.  A young man and a young woman.

The young woman was angry. She closed the door and shouted at the man: ‘Carl!  You can’t do this to me!’  The young man laughed loudly and sat down.

Mr. Harris was a small, quiet man. He wore quiet clothes, and he had a quiet voice.  He did not like noisy people and loud voices.  So he was not pleased.  ‘Young people are always noisy,’ he thought.  ‘Why can’t they talk quietly?’

He put his book down and closed his eyes.  But he could not sleep because the two young people didn’t stop talking.

The young woman sat down and said in a quieter voice: ‘Carl, you’re my brother and I love you, but please listen to me.  You can’t take my diamond necklace.  Give it back to me now.  Please!’

Carl smiled. ‘No, Elena,’ he said. ‘I’m going back to Russia soon, and I’m taking your diamonds with me.’ He took off his hat and put it on the seat. ‘Elena, listen. You have a rich husband, but I — I have no money. I have nothing! How can I live without money? You can’t give me money, so I need your diamonds, little sister.’

Mr. Harris looked at the young woman.  She was small, with black hair and dark eyes.  Her face was white and afraid.  Mr. Harris began to feel sorry for Elena. She and her brother didn’t look at him once. ‘Can’t they see me?’ he thought.

‘Carl,’ Elena said. Her voice was very quiet now, and Mr. Harris listened carefully.  ‘You came to dinner at our house tonight, and you went to my room and took my diamond necklace. How could you do that to me? My husband gave the diamonds to me. They were his mother’s diamonds before that. He’s going to be very, very angry —  and I’m afraid of him.’

Her brother laughed. He put his hand in his pocket, then took it out again and opened it slowly. The diamond necklace in his hand was very beautiful. Mr. Harris stared at it. For a minute or two nobody moved and it was quiet in the carriage. There was only the noise of the train, and it went quickly on through the dark cold night.

Mr. Harris opened his book again, but he didn’t read it. He watched Carl’s face, with its hungry eyes and its cold smile.

‘What beautiful, beautiful diamonds!’ Carl said. ‘I can get a lot of money for these.’

‘Give them back to me, Carl,’ Elena whispered, ‘My husband’s going to kill me. You’re my brother . . . Please help me. Please!’

Carl laughed again, and Mr. Harris wanted to hit him. ‘Go home, little sister,’ Carl said.  ‘I’m not going to give the diamonds back to you.  Go home to your angry husband.’

Suddenly there was a knife in the young woman’s hand. A long, bright knife.  Mr. Harris watched with his mouth open. He couldn’t speak or move.

‘Give the diamonds back to me!’  Elena cried.  ‘Or I’m going to kill you!’  Her hand on the knife was white.

Carl laughed and laughed.  ‘What a sister!’  he said. ‘What a kind, sweet sister! No, they’re my diamonds now.

Put your knife away, little sister.’

But the knife in the white hand moved quickly: up, then down. There was a long, terrible cry, and Carl’s body fell slowly on to the seat. The colour of the seat began to change to red, and the diamond necklace fell from Carl’s hand on to the floor.

Elena’s face was white.  ‘Oh no!’  she whispered.  ‘Carl! Come back. . . come back! I didn’t want to kill you!’ But Carl didn’t answer, and the red blood ran slowly over the floor.  Elena put her head in her hands, and again in the carriage there was a long, terrible cry.

Mr. Harris’s face was white too.  He opened his mouth, but he couldn’t speak.  He stood up, and carefully moved to the door. The young woman was quiet now. She didn’t move or look up at Mr. Harris.

In the corridor, Mr. Harris ran. The guard was at the hack of the train and Mr. Harris got there in half a minute.

The guard ran with Mr. Harris back to the carriage. Mr. Harris opened the door and they went inside.

There was no dead body of a young man. There was no young woman …  no blood, no knife, no diamond necklace. Only Mr. Harris’s bags and his hat and coat.

‘Yes —  and no,’ the guard said slowly. He thought for a minute, then looked at Mr. Harris.  ‘Elena di Saronelli,’ he said. ‘She had dark eyes and black hair. Very beautiful. She was half-Italian, half-Finnish. Her brother was a half-brother.  They had the same father, but his mother was Russian, I think.’

‘Oh no,’ said the guard.  ‘Elena di Saronelli died about eighty years ago. After she killed her brother with a knife, she jumped off the train, and died at once.  It was near here, I think.’ He looked out of the window, into the night.

Mr. Harris’s face was very white again.  ‘Eighty years ago!’  he whispered.  ‘What are you saying? Where she and her brother. . .  But I saw them!’

‘Yes, that’s right,’ the guard said.  ‘You saw them, but they’re not alive. They’re ghosts. They often come on the night train at this time in September. I never see them, but somebody saw them last year.  A man and his wife.  They were very unhappy about it. But what can I do? I can’t stop Elena and Carl coming on the train.’

The guard looked at Mr. Harris’s white face.  ‘You need a drink,’ he said. ‘Come and have a vodka with me.’

Mr. Harris didn’t usually drink vodka, but he felt afraid. When he closed his eyes, he could see again Elena’s long knife and could hear her terrible cry. So he went with the guard to the back of the train.

After the vodka, Mr. Harris felt better.  He didn’t want to sleep, and the guard was happy to talk.  So Mr. Harris stayed with the guard and didn’t go back to his carriage.

‘Yes,’ the guard said, ‘it’s a famous story.  I don’t remember it all.  It happened a long time ago, of course. Elena’s father was a famous man here in Finland. He was very rich once, but he had three or four wives and about eight children.  And he liked the good things of life.  So there wasn’t much money for the children. Carl, the oldest son, was a bad man, people say.  He wanted an easy life, and money in his hand all the time.’

The train hurried on to Oulu through the black night, and the guard drank some more vodka.  ‘Now, Elena,’ he said.  ‘She didn’t have an easy life with those three difficult men — her father, her brother, her husband.  One year she visited her mother’s family in Italy, and there she met her husband, di Saronelli.  He was rich, but he wasn’t a kind man.  They came back to Finland, and Carl often visited their house.  He wanted money from his sister’s rich husband.  Elena loved her brother, and gave him some money.  But di Saronelli didn’t like Carl and was angry with Elena.  He stopped giving her money, and after that. . .  well, you know the story now.’

Mr. Harris stayed with his friends in Oulu for two weeks. They were quiet weeks, and Mr. Harris had a good holiday.  But he took the bus back to Helsinki.  The bus was slow, and there were a lot of people on it, but Mr. Harris was very happy.  He didn’t want to take the night train across Finland again.

Short stories in English for students — next — South for the Winter 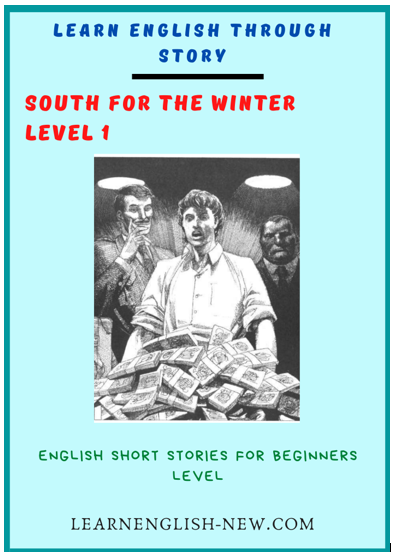