This is a photo of Benjamin, his wife, and his children. His wife’s name is Brenda. Benjamin and his wife are retired. His daughter’s name is Lara. She is twenty-one and she is a nurse. She is married and she has three children.

His son’s name is Benny. He is nineteen and he is a student. Lara’s husband is a nurse, too. His name is Mick. Mick is not in the photo. 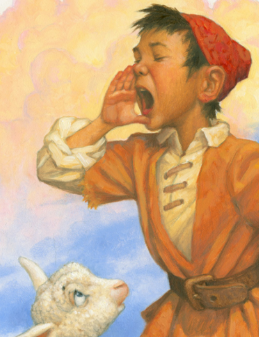 No one came. The wolf had a feast of sheep that day.

No one will believe a habitual liar even when he is telling the truth.

The Dog and His Master

There lived a hunter in a village with his family. He also had a pet dog that was very faithful. One day, the hunter had to leave the house for one day, so he went to the city with his wife. He left his son with his faithful dog. That night, a wolf came into the house and attacked the baby. On seeing this, the faithful dog pounced over the wolf and fought with him. After a long fight, the dog killed the wolf.

The next morning, the hunter and his wife returned from the city. The dog was waiting outside for his master. When he saw his master, he licked its feet. The hunter saw the stains of blood on the dog’s mouth. He thought that the dog had killed his son. He became very angry and killed the dog with his gun. Then he rushed inside to have a look at the baby. When he found his son safe inside him, he wept bitterly.

The Cat and the Rooster

One day a cat happens to grab hold of the rooster for its evening meal. She wanted, however, a good excuse for killing the bird.
«I need to rid the world of you,» she told the rooster, «You constantly make your horrible noises throughout the night, interfering with men’s much-needed sleep. The world will be better off without you.»

«No,» said the rooster, «I crow for the good of men. I wake them up each morning when it is time for them to start work for the day, so that they may earn their living.»

«Ridiculous!» said the cat, and she ate him.